For our last full day in Athens, we decided to ruins our day (tee-hee) and visit the Temple of Olympian Zeus and the Acropolis. After going to the base of the Acropolis the first day, we were back and forth about whether or not we wanted to spend €20 each on the walk up to the Parthenon and other structures—especially because it was pretty hot, and the ticket line was not short. Spoiler alert: we decided to go.

But, first, the most expensive W.C. stop of the trip. Public bathrooms don’t abound, so we often found ourselves stopping into cafés and buying something simply so we could use the bathroom. (You can also often go into a hotel and walk downstairs and find a bathroom, if you’re desperate.) After getting off the Syntagma metro stop, we walked through the National Gardens (where I missed an opportunity to follow the signs to the W.C.), stopping at a café at the edge of the public park.

One “greek coffee” (some coffee and ice cream combination), beer, and sparkling water later, much to our chagrin, we paid our €16 (!!!) tab. The rest of the day was marked by better decisions.

Sidenote on the Syntagma Metro Station: on display in the station are some interesting artifacts excavated during the station’s construction and even the cross-section of a tomb. 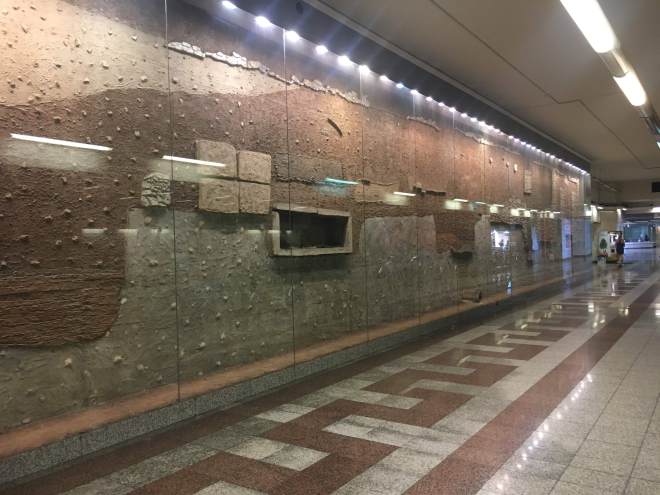 After paying our €6 entrance fee at the Temple of Zeus, we walked the site and gawked at the height of the columns. 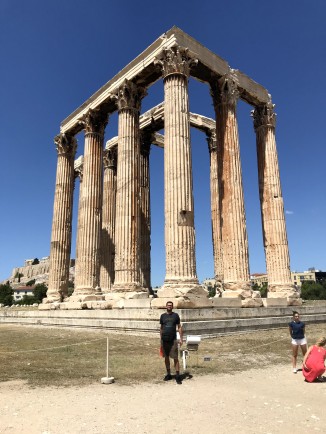 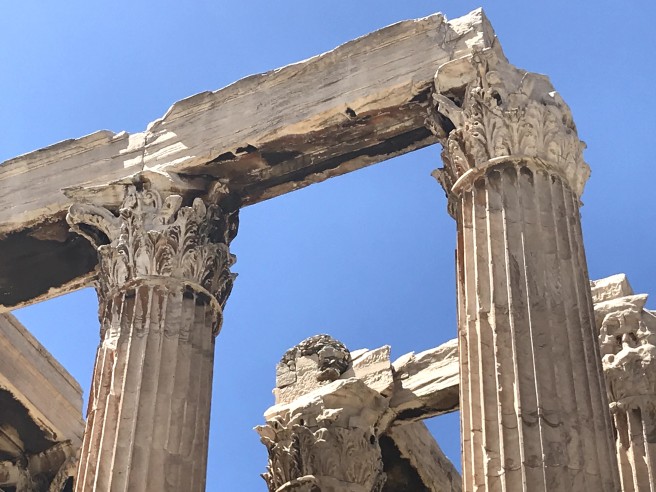 The area below the main temple was closed, but Perry asked one of the site workers if we’d be able to see the Temple of Apollo. Growing up on Rilke’s “Archaic Torso of Apollo” and watching and re-watching the Battlestar Galactica reboot, I thought it only fitting we make this stop if possible. Thankfully, we were able to have chaperoned access to it.

We decided to go to the Acropolis near closing in order to avoid the heat and the crowds.

The detail on the Parthenon and the caryatids (woman-shaped columns) wowed us. (The original caryatids are on display in the Acropolis Museum.)

We climbed into the overlook, gazed down on Anafiotika, the neighborhood under the Acropolis, saw several rooftop restaurants, and decided we wanted to have dinner on one of them.

We made our way back down, waving goodbye to each of the several cats we passed—there are so many cats in Athens. It reminded me some of Kedi, the documentary about the cats of Istanbul. 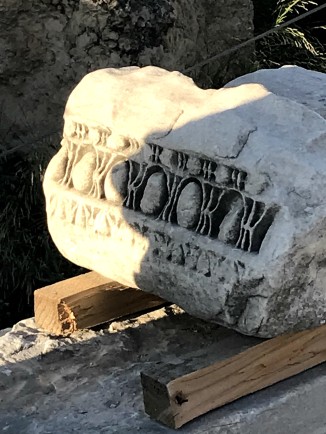 By the time we left, sunset was upon us, and the buskers had taken up their spots along the cobblestone street in front of the Acropolis. So many good noises to walk through.

Fun fact: on the food tour the day before, Georgia told us that most Greeks have dinner around 9:30 or 10 p.m. 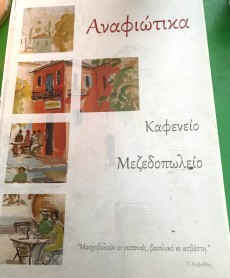 Dinner under the lit-up Acropolis was ridiculously romantic and worth the 45-minute wait. I ordered grilled mushrooms and eggplant with tomatoes; Perry had moussaka (basically, Greek lasagna, but with eggplant instead of noodles). 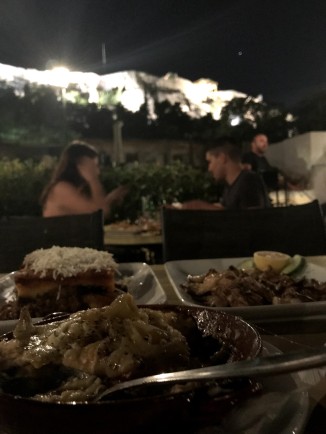 The Anafiotika area is not to be missed.

Next up: we get ready to fly to Santorini.