Poseidon has always been my favorite of the Greek gods—I’m a water sign (Cancer) and grew up a water baby, with deep ties to the ocean and St. Augustine, FL—so I knew I wanted to fit in a trip to the Temple of Poseidon if we could manage it. But I also knew I didn’t want to spend $100+ taking the private taxi or tour bus route, the latter of which I’d read many complaints about online, centered around how limited one’s time actually is at the temple. 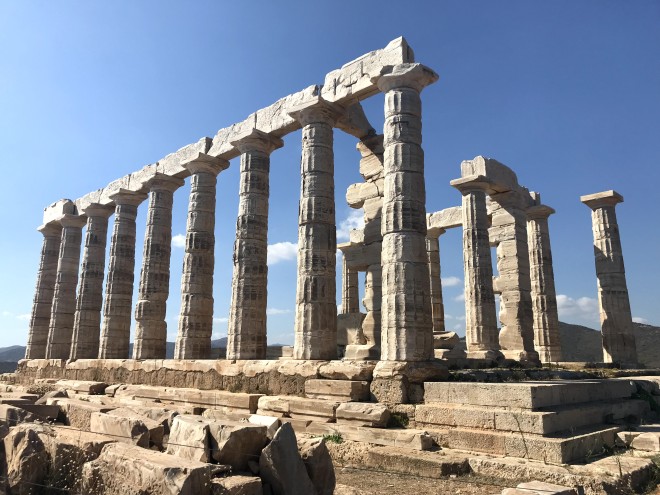 Around 1:30 p.m., after our food tour, we took the metro to Viktoria station, where we got off and made our way to the Pedion Areos Park bus terminal. (There are several other bus stops, including one near the Sygrou-Fix metro station near our hotel, but this was the first pick-up spot, and we wanted to be sure to get seats and to get situated.) Unlike the metro stops, the bus only had Greek signage, so we weren’t sure which bus to get on until the money-collector stepped off and let those gathered know that this was the bus to Sounion. The latest bus back to Athens is at 9 p.m.

You don’t buy tickets in advance; instead, aforementioned money-collector comes around once you’re seated, gets your money, and gives you a ticket. We went ahead and got a round-trip ticket: €25 total, so €6.25 each, one-way. It takes about 2 hours to get there, but the coastal drive is very beautiful. 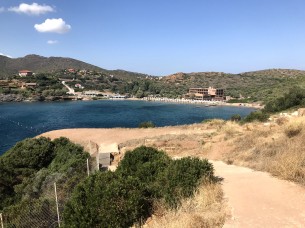 So beautiful, in fact, that I cried when we finally were driving alongside the sea. Those colors are unreal.

Every cove and beach was full of swimmers.

Due to the financial crisis, there are a lot of unfinished oceanfront and hillside structures that resonate more with the ruins than with the houses—even if the ruins are more hollowed-out carcasses, while the would-be homes and vacation rentals are skeletons to which skin and muscle never did attach—an overstock of science-class props that might never make it into a classroom.

You catch sight of the Temple of Poseidon several miles before arriving there, sitting as it is at the tip of the cape. 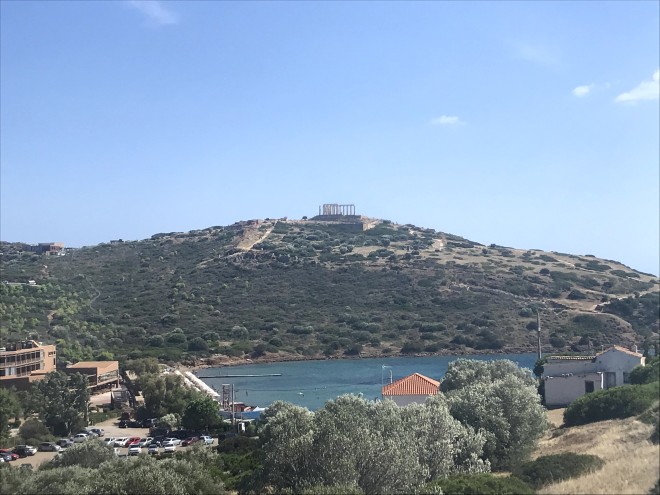 The bus’s final stop is Cape Sounion and the temple. You get out at the restaurant and gift shop, then walk a short way up to the temple entrance (admission is €8 in peak season, and €4 in the off-season).

As I mentioned in an earlier post, this is not the place to wear flowing dresses—wear something fitted so you won’t have to worry about holding it down.

I love the starkness of this temple and that it sits so near the cliffside and so close to the water—and because it’s on the tip of the cape, you get a panoramic view of the sea.

According to the women at the ticket desk, Lord Byron’s graffiti is too small and high to view without the help of binoculars, so we didn’t see it, but the restaurant menu and placemat include Byron’s lines about Sounion.

The walk around the temple site was stunning.

It took us to the Port of Sounion, an Athenian navel base, and an old fortress wall.

After exploring the site, we had dinner at the restaurant, positioning ourselves in the sun so we could eat and drink with an unobstructed view of the temple. 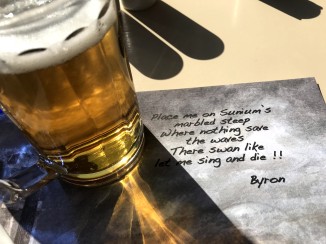 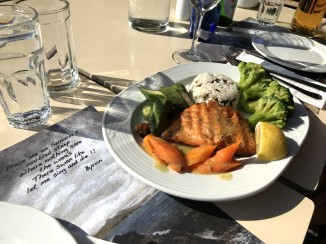 Had we planned ahead and brought an overnight bag and swimsuits, we would have found a room at one of the many coastal hotels and stayed the night. Alas, that wasn’t in our cards, so we took the bus back and got off at one of the coastal stops back in Athens, planning to take the tram back to our hotel after exploring some of the beach bars. 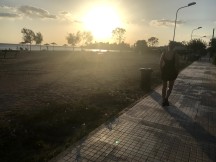 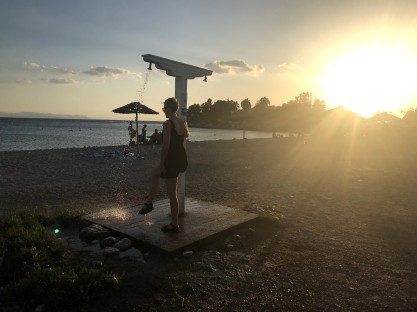 Here’s Perry touching the water for the first time.

We ended up at Nalu Café at the Akanthus Beach Club, just in time for sunset. Great ambiance and a sizeable patio for outdoor dining—not to mention ample beach seating. 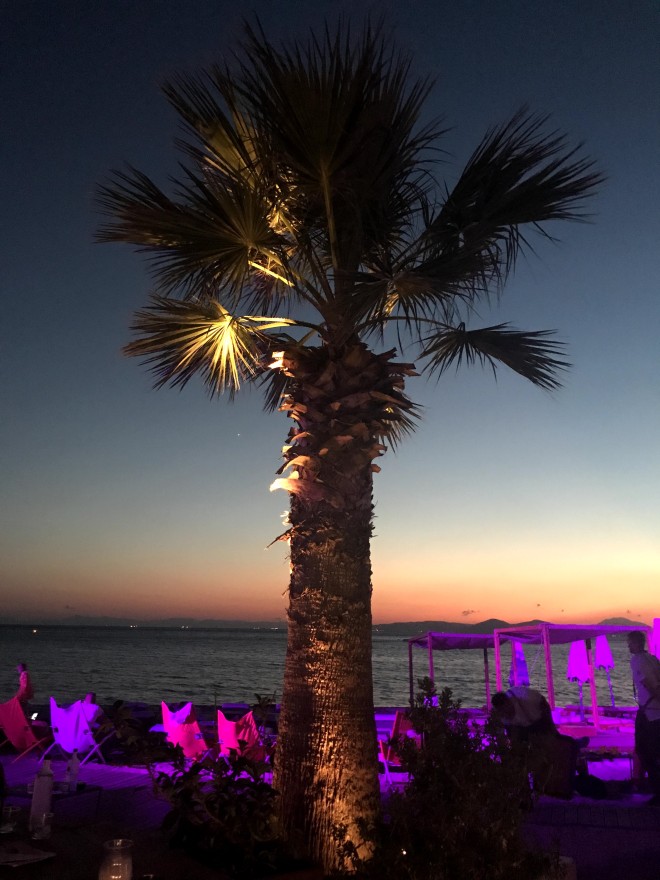 This was the first time we encountered a cocktail menu during our trip. We ordered a Mermaid Rocks and a Suffering Bastard, then some Coronas with lime (a café favorite, it would seem). (It was also the first time—and last?—we’d encountered Coronas in Greece.)

Since the 5-day Metro Pass includes the tram, we had no problem getting back to the area around our hotel (there’s a Fix tram exit right across from the Sygrou-Fix metro stop).

We walked down to Olympiou Georgaki Street, which is lined with sweet cafes and bars and home to our favorite bar of the trip, To Kouki, a dive bar with candlelit tables and great beer snacks (olives and nuts). This is where Perry tried Metaxa, a Greek brandy, for the first time.

This is a great place to cozy up and reminisce over the day before calling it a night.

Next up: we decide to pay the €20 entrance fee to the Acropolis, then have our favorite dinner of the trip—thanks to Perry’s persistence—in Anafiotika, under the lit-up Parthenon.