Before we left the States, we booked a food tour, so on day 3, we skipped breakfast (as recommended) and headed to the metro, stopping for an espresso (€0.80) at Coffee Island on the way. Turns out at 8:45 a.m. on a weekday, you’ll meet the morning rush—we were too timid and weren’t able to get on the first overstuffed train. Luckily, the next train came about 12 minutes later, and we were committed to getting on this time, no matter how full the compartments. We got off at the University of Athens stop (Panepistimio) and easily found the small food tour group (12 people plus the guide, Georgia). Before heading off, Georgia passed around a handout with the names and addresses of each stop, along with a note about the food we’d taste there—very handy for those of us who wanted to return to one of the stops or the areas near the stops.

We started off at a food cart near the meet-up spot and had what Georgia called “a Greek breakfast” (though she confessed a real Greek breakfast is five cups of coffee and as many cigarettes). Georgia bought and passed around half a dozen koulouri (sesame bread rings) for us to share. I didn’t expect it to have as much flavor as it did—the warm sesame seeds are quite fragrant and flavorful.

Next, we headed to Krinos to taste loukoumades (Greek doughnuts), but, first, we stopped and admired an old Greek Orthodox church. The wood craftsmanship on the windows is particularly beautiful.

The doughnuts were covered in syrup and cinnamon sugar. Perry and I both just ate one each, but there were plenty to go around, so people who wanted two were able to have them.

I picked this particular tour because it’s vegetarian-friendly (Perry’s the meat-eater in this relationship)—that said, the route did include a walk through Varvakios Agora, the central meat and fish market. Georgia checked in with me before we went through just to see if I wanted to skip this part of the tour.

It was definitely unlike anything I’d ever seen (and a bit too reminiscent of the slaughterhouse in Butchertown, a Louisville neighborhood near our own). See our Instagram @adventuresinwander to see an outtake from this part of the tour.

Afterward, we crossed the street and arrived at the fruit and vegetable market, where we tried halvah (a fudge-like chunk of sesame paste), candied nuts, and grapes. 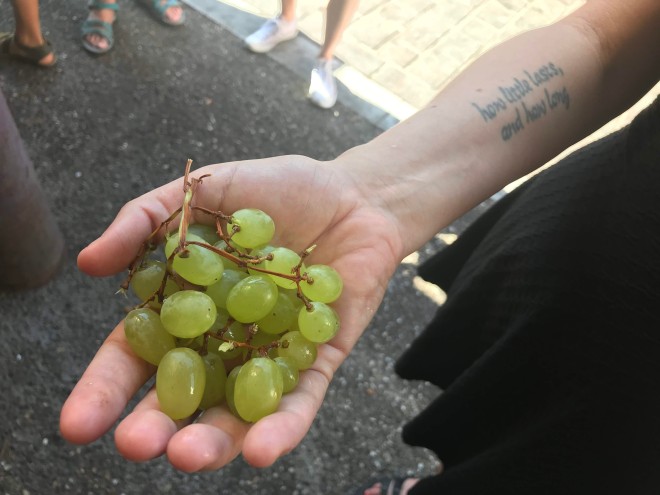 The next stop was my favorite: we sat in the charming back room of Stou Meidani and tried several small dishes, also known as meze, family-style. The super garlicky tzatziki was the best we had the whole trip. We also tried zucchini balls (yum) and baked feta with tomatoes and peppers.

The sole meat stop came next in the Pastourma neighborhood. Pastourma is a cured meat. Perry liked his thin slice and said it was unlike anything he’d tried before (he’s had his fair share of charcuterie plates). 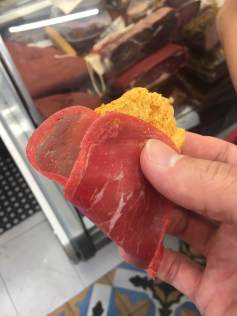 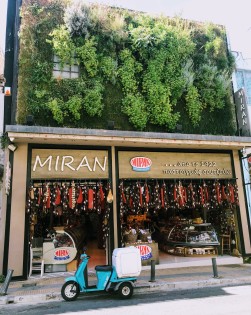 The herb store came next. We crushed thyme in our palms and smelled. I came away with some small-batch saffron and a complimentary recipe book.

I mistook an ouzo dispenser at the front of the store for a water dispenser, filled one of the paper cups, and took a big gulp, thinking I was rehydrating, before realizing my mistake. Oops.

We passed some great street art on the way to the sweet and savory pie shop, Bougatsadiko. 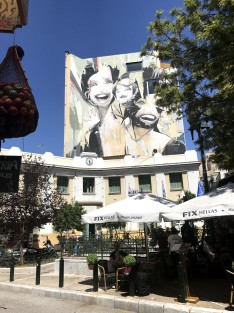 At the pie shop, we tried spanakopita (spinach pie) and sweet custard pie (bougatsa)—the latter was especially delicious, firm and not overly sweet. We ended up coming back to this area for our last meal in Athens.

The final stop was a souvlaki restaurant. Souvlaki is grilled meat, served either on a stick or in a pita with lettuce, tomato, tzatziki, and FRENCH FRIES! At €2.80, they make for a cheap lunch, too. I got the vegetarian version, basically a French fry pita, a meal I’d fallen for when I studied abroad my junior year—our stumble home included a stop to the gyro shop near our university flats. Sadly, at this point in the trip, I was too full to eat more than a few bites.

We thanked Georgia, handed her a tip, and made our way back to the Metro, heading to the bus terminal, where we hoped to catch the bus to Sounion and the Temple of Poseidon. Stay tuned for that adventure.

Not long after singing June Carter and Johnny Cash's "Jackson" at our favorite karaoke bar in Knoxville, TN, we got married in a fever in 2016, starting on a new adventure. A poet and a maker, we thrive on traveling and like to share what we learned along the way. Kristi does the writing, and Perry does (most of) the picture-taking. When we're not on the road, we like to support those who are: we converted the basement in our bungalow (our first home!) into an Airbnb and are Superhosts. This blog will cover our adventures away from home, but also some tips, from time to time, about spending a day in our city, Louisville. Kristi long ago fell in love with traveling and has spent time in Slovenia, Russia, Lithuania, China, Czech Republic, the United Kingdom, Italy, Spain, Belgium, Mexico, Germany, Austria, France, the Netherlands, Canada, Korea, Greece, and states across the U.S. Perry has grown up an adventure seeker, skiing, mountain biking, and kayaking across the U.S. View all posts by SpontaneoUS